Understand when to vent your roof, when not to, and how to execute each approach successfully

So much information has been devoted to the subject of roof venting that it’s easy to become confused and to lose focus. So I’ll start by saying something that might sound controversial, but really isn’t: A vented attic, where insulation is placed on an air-sealed attic floor, is one of the most underappreciated building assemblies that we have in the history of building science. It’s hard to screw up this approach. A vented attic works in hot climates, mixed climates, and cold climates. It works in the Arctic and in the Amazon. It works absolutely everywhere —when executed properly.

Unfortunately, we manage to screw it up again and again, and a poorly constructed attic or roof assembly can lead to excessive energy losses, ice dams, mould, rot, and lots of unnecessary nightmares. Here, I’ll explain how to construct a vented attic properly. I’ll also explain when it makes sense to move the thermal, moisture, and air-control layers to the roof plane, and how to detail vented and unvented roofs correctly.

The intent of roof venting varies depending on climate, but it is the same if you’re venting the entire attic or if you’re venting only the roof deck. In a cold climate, the primary purpose of ventilation is to maintain a cold roof temperature to avoid ice dams created by melting snow and to vent any moisture that moves from the conditioned living space to the attic. In a hot climate, the primary purpose of ventilation is to expel solar-heated hot air from the attic or roof to reduce the building’s cooling load and to relieve the strain on air-conditioning systems. In mixed climates, ventilation serves either role, depending on the season. 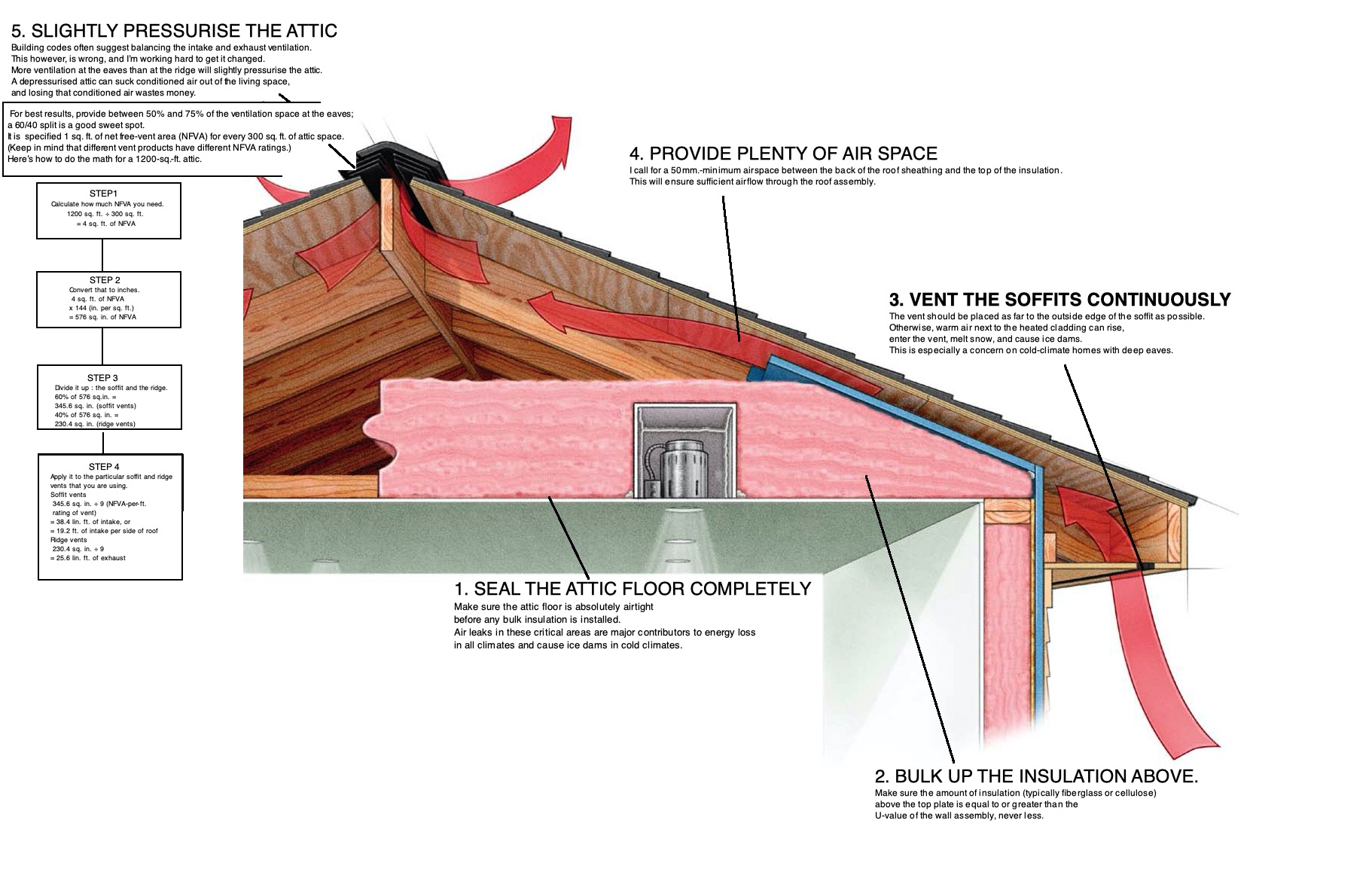 A key benefit of venting the attic is that the approach is the same regardless of how creative your architect got with the roof. Because the roof isn’t in play here, it doesn’t matter how many hips, valleys, dormers, or gables there are. It’s also easier and often less expensive to pile on Earthwool, Fibreglass  or cellulose insulation at the attic floor to hit target U values than it is to achieve a comparable U-value in the roof plane. The success of this approach hinges on the ceiling of the top level of the house being absolutely airtight before any insulation is installed. It’s also important to ensure that there isn’t anything in the attic except lots of insulation and air—not the Christmas decorations, not the tuxedo you wore on your wedding day, nothing. Attic space can be used for storage, but only if you build an elevated platform above the insulation. Otherwise, the insulation gets compressed or kicked around, which diminishes its U–value.  Also, attic access hatches are notoriously leaky. You can build an airtight entry to the attic, but you should know that the more it is used, the leakier it gets.

How do people get this simple approach wrong? They don’t follow the rules. They punch a bunch of holes in the ceiling, they fill the holes with recessed lights that leak air, and they stuff mechanical systems with air handlers and a serpentine array of ductwork in the attic. The air leakage from these holes and systems is a major cause of ice dams in cold climates and a major cause of humidity problems in hot climates. It’s also an unbelievable energy waste no matter where you live.

Don’t think you can get away with putting ductwork in an unconditioned attic just because you sealed and insulated it. Duct sealing is faith based work. You can only hope you’re doing a good enough job. Even when you’re really diligent about air sealing, you can take a system with 20% leakage and bring it down to maybe 5% leakage, and that’s still not good enough. With regard to recessed lights and other ceiling penetrations, it would be great if we could rely on the builder to air-seal all these areas. Unfortunately, we can’t be sure the builder will air seal well or even air seal at all. So we have to take some of the responsibility out of the builder’s hands and think of other options.

In a situation where mechanical systems or ductwork has to be in the attic space or when there are lots of penetrations in the ceiling below the attic, it’s best to bring the entire attic area inside the thermal envelope. This way, it’s not as big a deal if the ceiling leaks air or if the ducts are leaky and uninsulated. 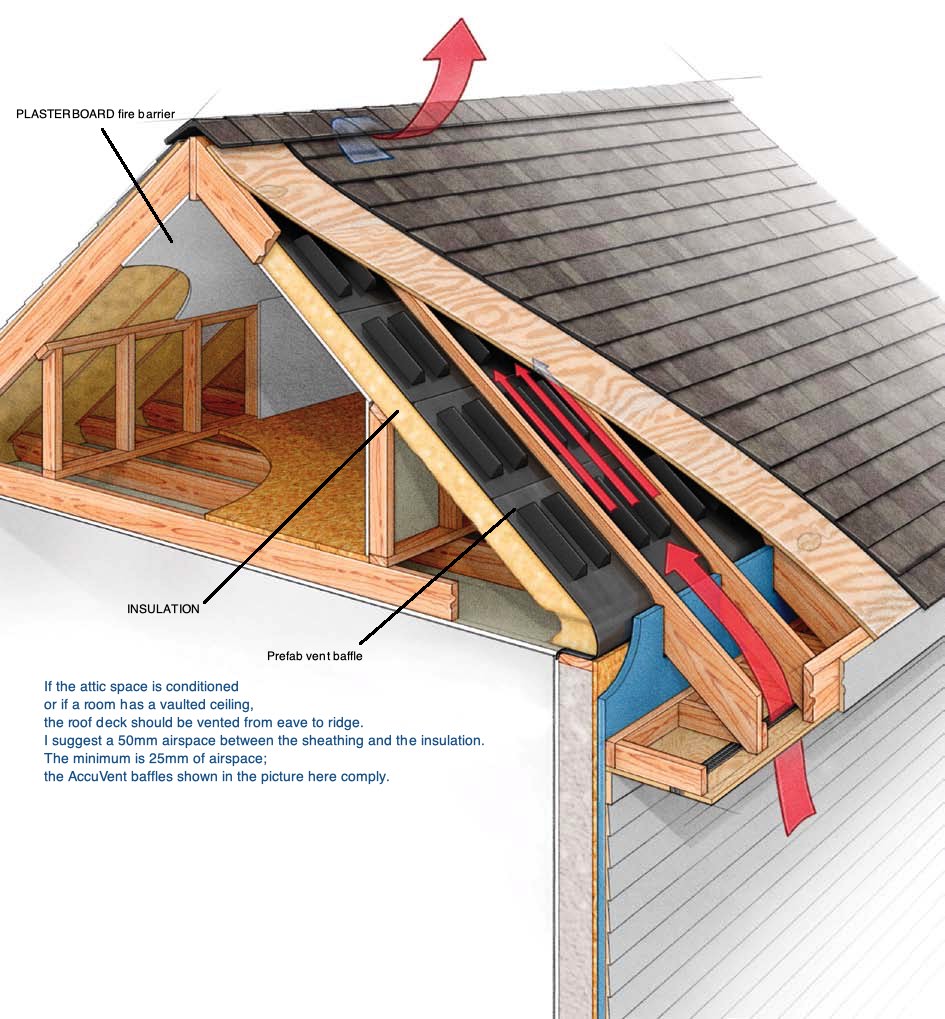 If the attic space is going to be conditioned, either for living or mechanical purposes, or if a home design calls for a vaulted ceiling, the roof deck above the space has to be vented continuously from the eave to the ridge. This is easy to accomplish in simply constructed roofs and difficult, if not impossible, to accomplish in roofs that have hips, valleys, dormers, or skylights that interrupt the rafter bays.

If you choose to vent the roof deck, then be serious about it and really vent it. The commonly used minimum of 25mm of airspace between the top of the insulation and the back of the roof sheathing is not enough. For best performance, the airspace in the vent chute should be a minimum of 50mm deep. Unless you’re bulk-filling rafter bays between 2×10 or 2x8 rafters with closed cell spray foam, this approach will likely require you to fur out the rafters to accommodate additional insulation in order to achieve desired U-values. That can be a pain, but you won’t run into the problems associated with having too little air circulating under the roof. To be sure your roof is getting enough ventilation, there are simple calculations that you can follow (see graphic above )

Beyond the decreased capacity for insulation when venting the roof deck, venting the roof deck or the attic has some other drawbacks worth considering. In cold climates, snow can enter the soffit and ridge vents, melt, and potentially cause rot. Similarly, in coastal environments or in regions with lots of rain and wind, moisture can be forced into the vents and into the roof assembly.

If any of these issues are of concern, there is another option.

Unvented assemblies work particularly well on complex roofs that would be difficult or impossible to vent properly or on roofs where it would be difficult to insulate properly if the roof were vented. It should be noted, however, that in high-snow-load areas, you still need a vented over roof to deal with ice damming. In essence, you’re creating a hybrid vented/unvented roof system.

If you are spraying foam on the underside of the roof deck, be sure you’re using the right product. Closed-cell spray foam works in all climates, but especially well in climate zones 5 through 8, where high U-values are desired and where air impermeable insulation also must be a vapour retarder. Low density, open-cell foam is permissible, but in climate zones 5 and above, it has to be covered with a vapour-retarder coating, like rigid foam or painted drywall.

Also pay attention to roofing materials. Metal roofs require special attention when installed on unvented roof assemblies in marine climates due to inward vapour drive. To keep moisture out of the roof assembly, a metal roofing underlayment  must be installed under the sheets. Also, check to be sure that you are in compliance with the manufacturer warranties when installing metal sheets over an unvented roof .

You can vent the roof sheets  by battening , which will have the same effect but depending on roof pitch and sheets  chosen, may not be worth the extra expense. 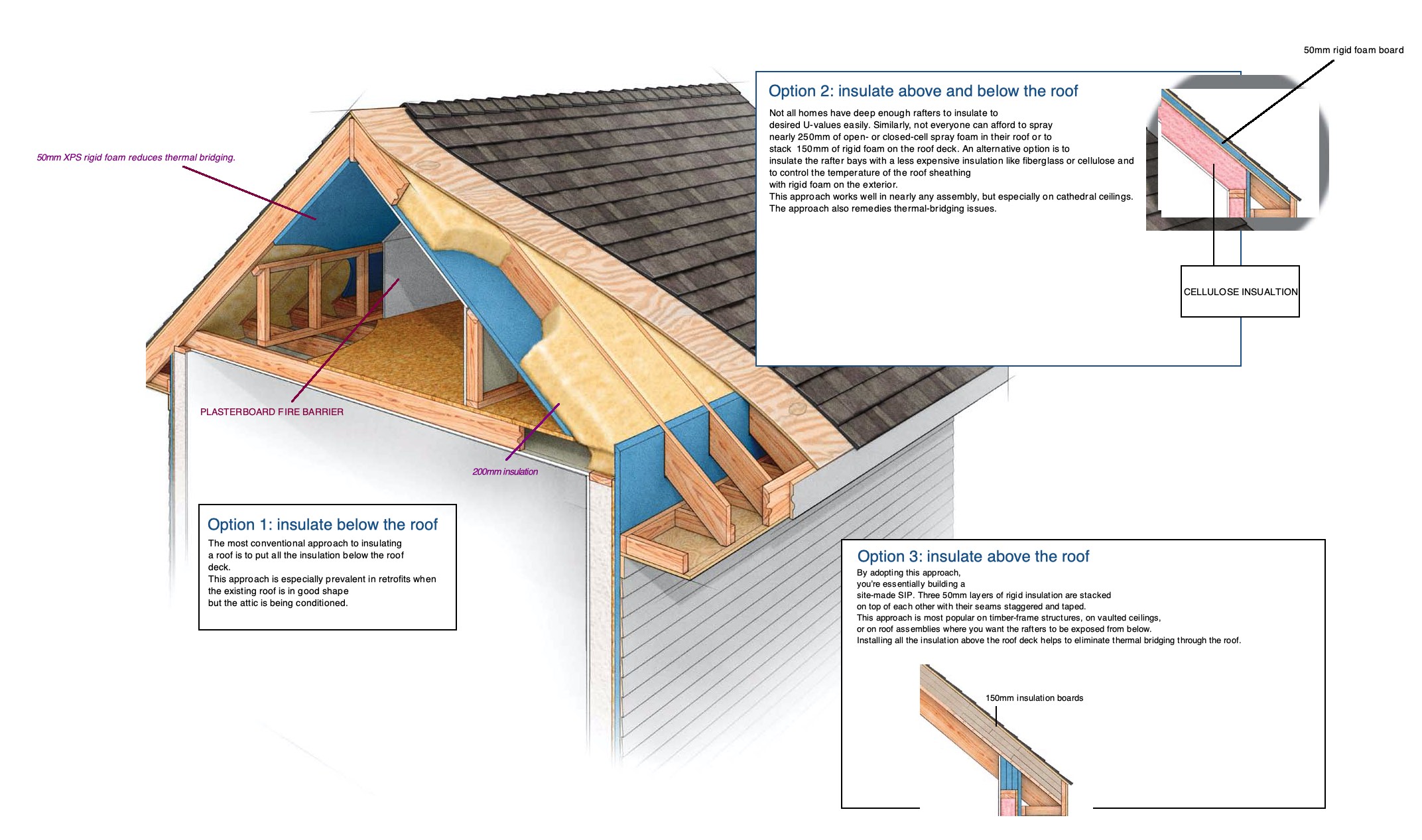 The success of a vented attic or roof deck relies on its airtightness. The space above the top plate of exterior walls—at the bottom of each rafter bay—is especially important. Baffles placed in this area channel intake air into either the attic space or vent chutes, and also prevent insulation from falling into the soffit and blocking airflow. 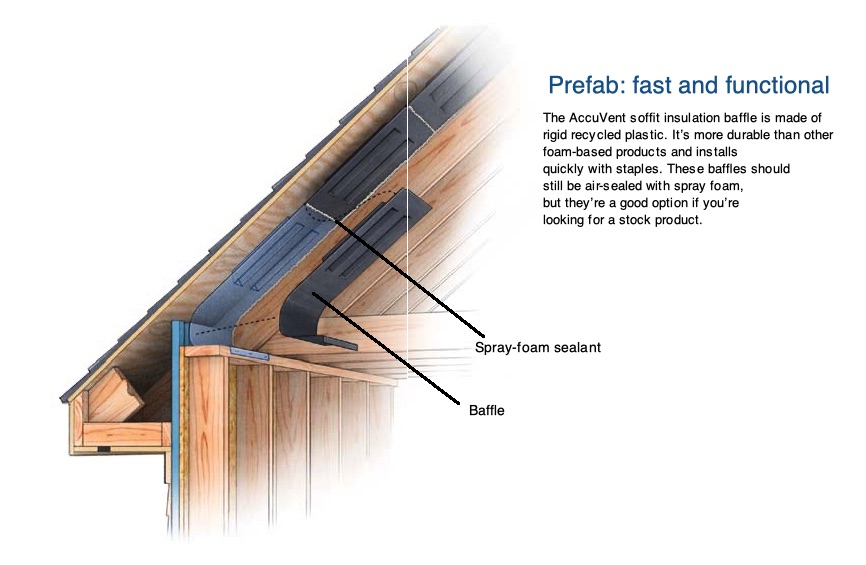 This website uses cookies to improve your experience while you navigate through the website. Out of these cookies, the cookies that are categorized as necessary are stored on your browser as they are essential for the working of basic functionalities of the website. We also use third-party cookies that help us analyze and understand how you use this website. These cookies will be stored in your browser only with your consent. You also have the option to opt-out of these cookies. But opting out of some of these cookies may have an effect on your browsing experience.
Necessary Always Enabled
Necessary cookies are absolutely essential for the website to function properly. This category only includes cookies that ensures basic functionalities and security features of the website. These cookies do not store any personal information.
Non-necessary
Any cookies that may not be particularly necessary for the website to function and is used specifically to collect user personal data via analytics, ads, other embedded contents are termed as non-necessary cookies. It is mandatory to procure user consent prior to running these cookies on your website.
SAVE & ACCEPT

Our Webshop is currently not available. We are updating our products database. Dismiss